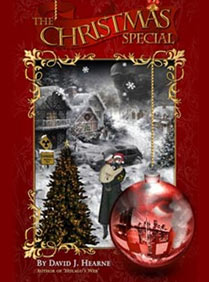 The spellbinding novel weaves together current events with fiction creating a sobering reality of an event whose actual occurrence is certainly probable.

A 16-year-old Muslim girl named Sheeva, who falls in love with a 19-year-old agnostic American boy, becomes a primary figure in the tumultuous story. Her father, Ali Hasson, is an Afghanistan doctor given political asylum in America because of the assistance he provided US forces during the onset of the war.

A dark side of Sheeva's father, however, is his habitual beating of her because of her westernized behavior and relationship with an unbeliever. Sheeva finally runs away from home and his beatings. During her escape she inadvertently discovers her father is the architect of a major terrorist attack scheduled to occur on Christmas morning. When she and her boyfriend Jason try to alert officials of the plot, they are met with the fact that if they admit their relationship, Jason would face being arrested for harboring Sheeva, a runaway, statutory rape, lascivious conduct with a minor and numerous other charges. Conviction of these charges, would label Jason as a registered sex offender for the rest of his life.

The Romeo and Juliet couple are faced with the moral dilemma of saving thousands of lives but having their lives destroyed by the legal quagmire; or stay quiet about her father's terrorist ambitions and avoid Jason facing charges over their affair, but knowing their silence helped bring on the death of many.

What would you do faced with this young couple's unenviable dilemma? Would you stay silent or risk prison and save Christmas and the world as we know it?