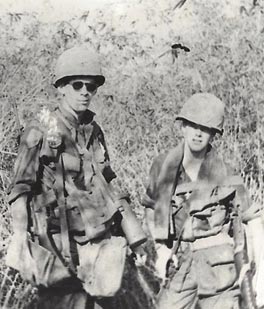 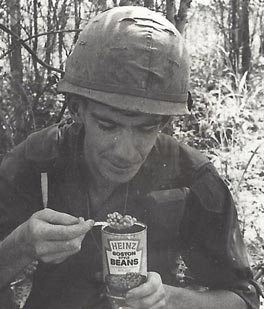 BACK IN JUNE OF 1967, IN THE MIDDLE OF SOUTH VIETNAM'S MONSOON, THE 1ST INFANTRY DIVISION DECIDED TO ENTER INTO THE INFAMOUS "WAR ZONE D" ABOUT 47 MILES NORTH OF SAIGON. THIS WAS AN AREA THAT THE BATTLE HARDEN 271ST VC REGIMENT CONTROLLED. IT WAS A TRIPLE CANOPY FORESTED REFUGE THAT HAD BEEN A HAVEN FOR THE VIET CONG FOR MOST OF THE WAR. IT WAS RIDDLED WITH TUNNELS STORING LARGE QUANTITIES OF MILITARY, MEDICAL AND FOOD SUPPLIES. IT WAS A VERY STRATEGIC STRONGHOLD FOR THE VC.

ON JUNE 17TH I WOULD EXPERIENCE MY BIGGEST BATTLE OF MY MILITARY CAREER THERE IN "WAR ZONE D." I CAME OUT ALIVE, BUT 39 DID NOT AND 150 MORE WERE WOUNDED. IN A FEW HOURS BATTLE 189 BECAME CASUALTIES OF THE BATTLE OF XOM BO II. MY NEW BOOK IS ABOUT THAT EXPERIENCE AND THE MEN IN ARMS THAT I FOUGHT ALONGSIDE.

It is an excellent account of fighting and dying in Vietnam complete with enough background information of individual soldiers to more than sustain a reader’s interest. Even though a combat infantryman and former RTO myself, your vivid descriptions created pictures easily viewed by even the most the inexperienced reader.

You accurately captured living conditions of the Vietnam soldier, from boredom to sheer terror, all within a twelve hour period. No one can adequately explain the intensity of battle but you came as close as anything I've read.

Your book does a great service to the men who fought the families who lost loved ones, the men who died and soldiers everywhere. I dare say, it was obvious to me that you were there!

Thank you for a fine contribution to the exhaustive history of the 28th Infantry Regiment.

David Hearne, an OCS classmate, fellow artilleryman and decorated Vietnam War Veteran, has written a compelling and compassionate book about war: its scope and many dimensions. Above all, it is about the human component and raw emotions of those brave soldiers in the fight. David takes us on a personal look at small unit leadership and the human cost for those on the field of battle and those back home. He also reminds us that, along with the physical scars of battle, there are the emotional scars.  Those scars often linger long after the sounds, sights and smells of the battle are no longer readily apparent.

In David’s own words “a war of attrition as the main strategy of a war is not a strategy at all.  Attrition, unfortunately, is simply part of the very nature of war.” Clausewitz posited that war was politics by another means. There must be more logic applied to the prosecution of wars and more thought of what our actions will cause. Our institutions must do a better job of defining who we are and for what we stand. When we define those boundaries, we cannot continue to allow people and factions to stray outside of them. We have been involved in “incrementalism” to a fault since the end of WW II.

David Hearne’s book is a heartfelt and thoughtful recount of a Vietnam battle that should serve as a constant reminder of what is at stake when our nation calls. Our soldiers are willing to give their all. We should expect that our senior military and civilian leaders are willing to do no less.