The bullet riddled campaign bus of senator Katherine Laforge is found on a lonely snow swept road near Charlestown New Hampshire. Who are the assassins behind this deadly attack of a presidential candidate? Who wants her dead? Has her unorthodox quest for peace between Iraq and the USA incensed her foreign policy adversaries to the point of killing her? Could the perpetrators of this attack be any of the thousands of accountants, Lawyers or IRS agents who fear and loathe Katherine's campaign pledge to replace Income tax with a simple national sales tax? Is her support and policies for the United States to end its reliance on foreign oil, incendiary enough for the billionaire oil cartel to silence her? Is she a victim of an Islamic militant's reprisal for her outspoken view on their Jihad? Or is this attack simply because Senator Katherine Laforge is now a clear and present danger to the age-old bastion of men at the helm of the United States?

We invite you to help unravel this story of political intrigue. Eleanor Roosevelt once said: "It is certain that women do not want a woman for President. Nor would they have the slightest confidence in her ability to fulfill the functions of that office."

Read Katherine LaForge’s pursuit of the presidency and decide for yourself if this woman has the experience, common sense and fortitude too serve as your next president of the United States. 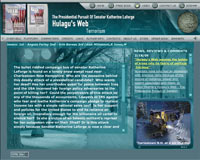