BLOODSTAINED TALES OF SIN AND SEX 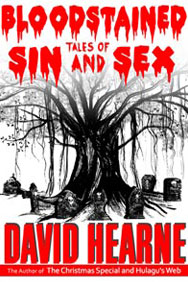 "Bloodstained Tales of Sin and Sex" is a trio of short stories written by David Hearne that present a cast of evil yet interesting villains. Some are loathing underdogs that are unsympathetic characters that will anger you with their evil and sadistic actions. And some protagonist will have you cheering for their success in their quest to kill. Some of the stories are incredibly suspenseful and full of horror that comes not from imaginary evil entities, but from insane acts of human cruelty; much scarier than the boogie men under the bed. Scenes from Bloodstained tales of Sin and Sex will shock, disgust, yet grossly satisfy your thirst for decadent horror stories. Each story is fast paced with action and suspense.

Revenge is coming to a beautiful female cop in Beaumont Texas who desires to kill her mother's murderer. She and some other good folks of Beaumont are going to make it happen. Someone is going to die slowly and their screams won't help. How diabolical can her revenge be when she comes face to face with the murderer of her mother? Very!

When good luck suddenly swings in Raymond Billing's direction after years of no luck, he is elated. He has a job, good looks and lots of ladies, but what will he do if his nightmare life returns?

Does the mighty Banyan tree have the ability to recognize good from evil? That question is answered in this strange tale of redemption of a black family after they survive the oppression and brutality of post-Reconstruction America only to lose their house, land and more to the local KKK. Decades later redemption is finally on the table with the help of a Banyan tree and a Santeria Priestess.